The Gangneung Danje Festival begins on the fifth day April of the lunar calendar when the mayor and people of Gangneung offer the rice and malt with which the sacred liquor is to be brewed. The sacred liquor is brewed at Chilsadang, the ancient government office of Gangneung, after shamans perform Purification ritual to cleanse the ritual site of all the impurities.

On this day the entire Gangneung-city enters a period of abstinence and in particulaly the priests and shamans who would carry out the ceremonies purify their minds and bodies.

Both the rituals are offered at the shrines situated in Dangwallyeong Ridge on the fifteenth day of April on the lunar calendar. General Kim Yusin who defended the nation, became the mountain deity of Daegwallyeong Ridge after his death and Royal Tutor Beomil, who was born in Gangneung and was a highly virtuous and prominent monk of Seon(Zen) Buddhism, became the royal tutor tutelary deity of Daegwallyeong Ridge after his death and functions symbolically as a local guardian deity. The rituals are attended by the people of Gangneung, shamans and officiating priests. After the rituals, the sacred tree(sinmok) is selected and brought down to Gangneung. During the Dano Festival, the sacred tree, as a symbol of the deities, is the object of many prayer's supplications.

The ceremonial ritual is followed by the shamanic ritual(gut) performed by the female shamans. After having lunch here, the procession headed towards Haksan Tutelary Deity Shrine in Haksan village. Haksan is the hometown of Royal Tutor Beomil, who became the Royal Tutor Tutelary Deity.

Following a simple parking of sacrificial food and drink, the procession visits Seokcheon Well and the Stupa of Gulsansa temple site in the village and leaves for downtown Gangneung. The procession visited this hometown reminds that the people of Gangneung that the legend of Royal Tutor Beomil is based on actual historic fact.

The ritual of enshrining deity at Daegwallyeong

After the two deities are enshrined together, a ritual is performed. Historical figures, such as General Kim Yusin, Royal Tutor Beomil, and Lady Jeong were reborn as mythical figures and became guardian deities of the Gangneung region, forming the spiritual foundation of the Gangneung Danoje Festival.

The ritual of welcoming deity

Yeongsinje is held on the third day of May on the lunar calendar at the Royal Tutor Female Tutelary Deity Shrine before bringing the male and female tutelary deities to the shamanic ritual site Dano altar by Namdaecheon Stream. The citizens carry Dano Festival lanterns to welcome the tutelary deities and lead them down to the ritual site.

The Dano Festival lanterns are set adrift on Namdaecheon Stream as prayers are offered.

Jojeonje is held on the Dano altar every morning at 10 o'clock from the fourth day to the seventh day of May on the lunar calendar.

Since the ritual is dedicated to praying for a bountiful harvest and tranquility in the Gangneung and Yeongdong area, the head figures of organizations in Gangneung become the officiating priests and take turns in serving as the Choheongwan, Aheongwan and Jongheongwan.

On the evening of the seventh day of May on the lunar calendar, sending off ritual is performed to bid farewell to the male and female tutelary deities.

Following the Confucian ritual for sending off the deities, the returning ritual is performed to make sure that the tutelary deities have been served well by the rituals.

The ritual is completed by burning everything that was used in the rituals, including the sacred tree, the paper flowers, the octagonal lanterns, the hand lanterns, and the boat. 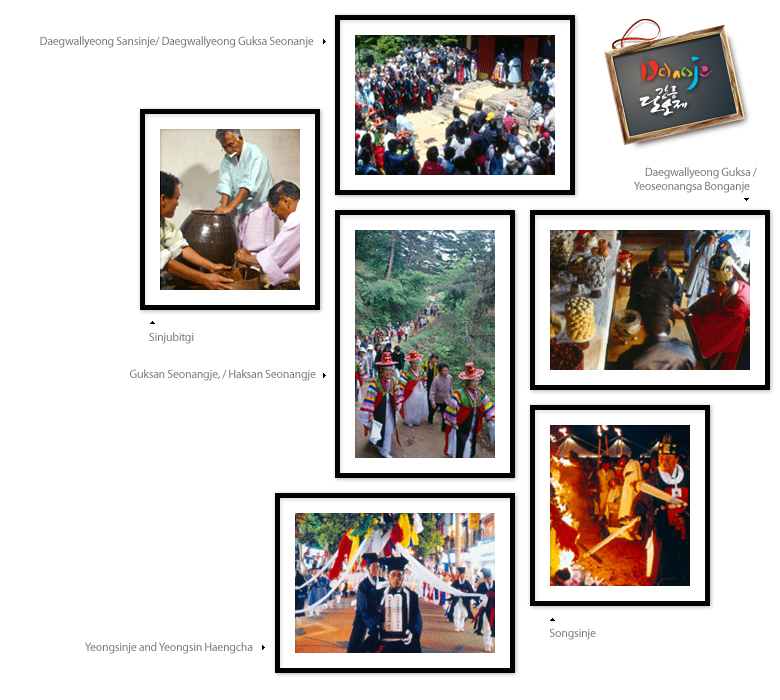