The shamanic rituals of the Gangneung Danoje Festival preserves the essence of traditional Korean shamanic performance art, such as dance, music, song, dress, and ritual stories.

Shamanic rituals are carried out by several female shamans and a large number of musicians.The head shaman sings the shaman song in time with the rhythm of the double-headed drum. About there to eight musicians strike cymbals and gongs, creating a varied rhythm as the shaman performs the shaman song or dances. Various deities are worshiped in the Gangneugn Danoje Festival, but the main ones are the royal tutor male and female tutelary deities.

The Gangneung Gwanno Mask Drama is pantomime that was traditionally performed by the male and female servants of the government office. The characters are the yangban aristocrat, the new bride, two sisiddakddagi, and two jangjamari.

The largest market in the entire country is held during the Gangneung Danoje Festival period, and local products and hand crafts from each region are sold. This makes economic profit and the exchange of information about a variety of products possible.

The Korean term nanjang(literally meaning "place of chaos" or "place of confusion")is used to describe the marketplace, where not only are goods sold out but wrestling matches, agricultural copetitions games, circus performances and a variety of free gift events are held. Thus, nanjang does participants experience communitas and chaos.

Globalization of the Gangneung Danoje Festival

Gangneung has been producing and distributing English pamphlets, DVD, and educational materials on Gangneung's intangible cultural heritage to make the Gangneung Danoje Festival a world-famous cultural festival and has established an Inter-City Network around the world through the International Tourism and Folk Festival, the international Round Table of Mayor, and the International Workshop of Local Government Administrators to further promote the Gangneung Danoje Festival to the world. 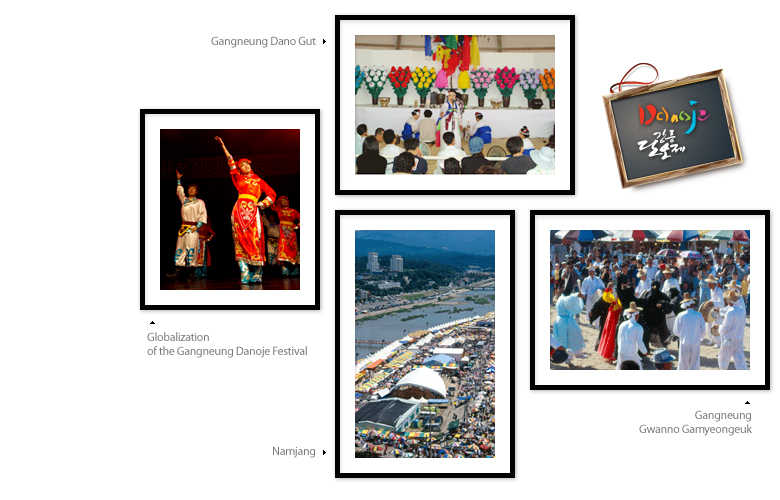